In the very heart of the city, the new Renaissance Aix-en-Provence 5-star hotel offers 133 spacious rooms and suites. The décor is a contemporary reinterpretation of the symbols of Provence. Located in the center of Aix-en-Provence and just steps away from all the shops and restaurants the are to enjoy during your stay. The hotel also features an award winning restaurants and outdoor garden dining. You can also enjoy the full service Spa and Fitness center. 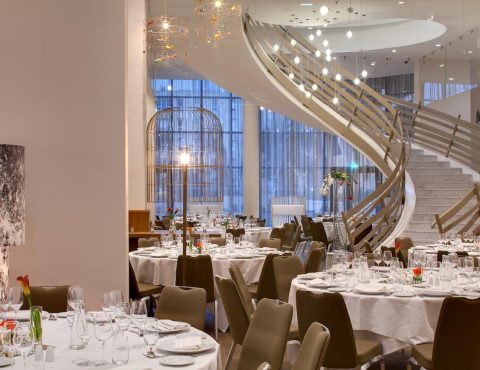 Ideally situated in the heart of Aix en Provence, surrounded by a magnificent Mediterranean garden, you will find the 4Star Aquabella Hotel. With 108 comfortable rooms, this unexpected haven is the ideal departure point for carefree strolls into the town that Cézanne held so dear. Emerge yourself in the serene, contemporary surroundings, taking advantage of the Sensory Spa and heated outdoor pool (open from May to September, weather-dependent). Sit back and enjoy a relaxing drink at L’Instant Lounge Bar before savoring the specialities of L’Orangerie restaurant or La Terrasse de la Tour, open from May to September.

Day 1: (Optional arrival Thursday with track transfers and tickets on Friday)
Thursday: Arrive and be greeted by the Grand Prix Club staff at your hotel.

Day 2:
Friday: Breakfast at your hotel and then depart on our private Vip transfer to the Circuit at Paul Ricards. Spend the day watching two Formula 1 practice sessions plus support races from our great seats.  Private transfer for the return to our hotel in the afternoon. Dine at the hotel or one of the many fine restaurants in town.
(B)

Day 3:
Saturday:  Breakfast at your hotel and then departure on our exclusive private Vip transfer to the track for Formula 1 practice session plus qualifying. Lots of other track activity all day.  Private transfer back to our hotel in  the afternoon and your evening free.
(B)

Day 4:
Sunday: Breakfast and then off on our private Vip transfer to the track for the Grand Prix.  Private transfer to our hotel in the late afternoon and then enjoy a dinner hosted in town at one of the many fine restaurants.
(B)

Day 5:
Monday: Breakfast and then either on your way to the Marseille airport on continue on your extended stay in Europe. Airport transfers can be arranged.
(B)

The French Grand Prix at the Paul Ricard track near Marseilles was first held at the venue in 1971, Jackie Stewart and Francois Cevert headed the field with a Tyrrell-Ford team 1-2 result. Stewart won again in 1972, this time at Clermont-Ferrand, although even he was overshadowed by the performance of New Zealander Chris Amon in the French Matra Simca MSI20D. Amon led easily, suffered a puncture and then made a remarkable, record-breaking recovery to snatch third place behind Emerson Fittipaldi and receive a hero’s welcome. It was back to Paul Ricard for the 1973 race which marked the first Grand Prix victory for Swedish driver Ronnie Peterson UPS/Lotus 72-Ford). However, another newcomer made the headlines, South African Jody Schekter (McLaren M23-Ford) leading until Fittipaldi attempted an impossible overtaking maneuver with his JPS/Lotus 72-Ford and effectively eliminated the pair of them from the race. In 1974 the race moved to another new home, at Dijon, and Peterson scored again – from Niki Lauda’s Ferrari. Ricard was the venue in 1975 and 1976, after hopes of a return to Clermont-Ferrand had faded. Lauda held off a strong challenge from James Hunt to win the 1975 race by 1.59 seconds and Hunt himself won the following year from Patrick Depailler’s six-wheeled Tyrrell.

The 1979 French Grand Prix at Dijon was one of the most memorable Grands Prix of all time. There was an epic battle for second place between Gilles Villeneuve in the Ferrari and René Arnoux in the Renault. Villeneuve eventually won the battle for second, but the winner – Jean-Pierre Jabouille in the sister Renault – would win the race and in doing so would claim the first Formula 1 victory for Renault as well as for a turbocharged car.

The move to Circuit de Nevers Magny-Cours. The 2004 and 2005 races were in doubt because of financial problems and the addition of new circuits to the Formula One calendar. These races went ahead as planned, but it still had an uncertain future. On 29 March 2007 it was announced by the FFSA, the race promoter, that the 2008 French Grand Prix was put on an indefinite “pause”. This suspension was due to the financial situation of the circuit, known to be disliked by many in Formula One due to the circuit’s location. On 31 May, Bernie Ecclestone confirmed (at the time) that the 2007 French Grand Prix would be the last to be held at Magny-Cours. However, after various negotiations, the future of the race at Magny-Cours took another turn, with increased speculation that the 2008 French Grand Prix would return, with Ecclestone himself stating “We’re going to maybe resurrect it for a year, or something like that”. On 24 July, Ecclestone and the French Prime Minister met and agreed to maintain the race at Magny Cours for 2008 and 2009. The change in fortune was completed on 27 July, when the FIA published the 2008 calendar with a 2008 French Grand Prix scheduled at Magny-Cours once again. The 2009 race, however, was again cancelled on 15 October 2008, with the official website citing “economic reasons”. A huge makeover of Magny-Cours (“2.0”) was planned, but cancelled in the end. The race’s promoter FFSA then started looking for an alternative host. There were five different proposals for a new circuit: in Rouen with 3 possible layouts: a street circuit, in the dock area, or a permanent circuit near the airport, a street circuit located near Disneyland Resort Paris, Versailles, and in Sarcelles (Val de France), but all were cancelled. A final location in Flins-Les Mureaux, near the Flins Renault Factory was being considered however that was cancelled as well on 1 December 2009. From 2010, there was no French Grand Prix on the Formula 1 calendar until the race was again hosted in 2018 back at Circuit Paul Ricard.