Monaco Grand Prix
Things to Do

Monaco Grand Prix Things to Do

The Monaco Grand Prix and certainly offer some significant logistical challenges and that is when our experience really comes in handy. I often say that we are in the “aggravation elimination business”. As a licensed Tour Operator, we have been providing travel packages and tickets to the F1 Monaco Grand Prix since 1982. If you are looking for the best options for Monaco Grand Prix 2020 tickets, packages, hospitality tours and dates you have come to the right palce. Let us show you how to best experience all of the action at the 2020 Monaco Grand Prix. Dates for the 2020 Formula One Monaco Grand Prix are May 21 to 24, 2020.

Whether you opt to watch the 2020 Monaco Grand Prix from our exclusive suite with covered terrace located directly on the track with the most spectacular view (Gold and Platinum Packages) or choose reserved grandstand tickets (Silver packages) you don’t want to miss this experience.

RESERVE WITH US NOW for the best available options and prices.

Experienced Race Staff Standing By to Answer your Questions

GETTING AROUND IN NICE AND MONACO DURING THE MONACO GRAND PRIX

The train system will allow you to move easily between Nice and Monaco and also along the Riviera coastline. Easy day trips to Cannes, Antibes or Italy can be made. 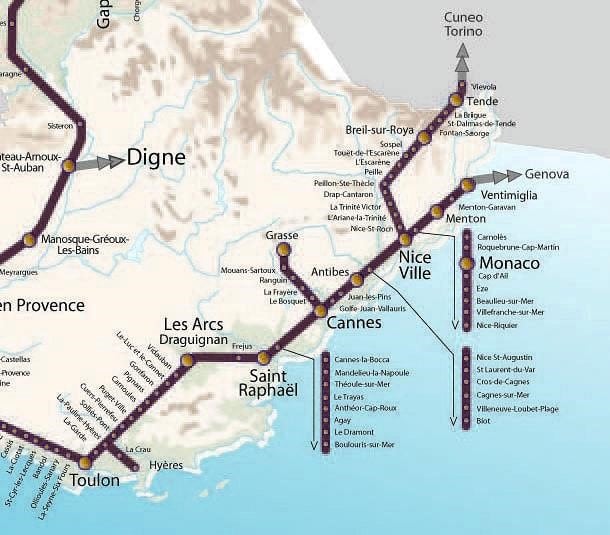 Staying in Monaco itself on Grand Prix weekend beyond your budget? Although we offer several hosted packages that include options with hotels, tickets, hospitality and transfers some are still beyond the budget of some fans. Don’t worry, you won’t be alone. Most F1 fans stay along the coast outside of Monaco where the accommodation is more reasonably priced. Whether you are staying in Nice or surrounds (around 20km to the south), to the north in Menton (10km from Monaco) or on the Italian side in Ventimiglia (25km from Monaco), getting to the circuit is surprisingly cheap and not actually too difficult. Trains are the best option, followed by buses. Don’t rule out driving yourself, particularly on Thursday and Friday before the big crowds descend on the weekend. However, most of the parking lots in Monaco are closed during the event and used for some of the event support vehicles.

The train station in Monaco  is centrally located on the hill behind the Sainte Devote corner. Finding your grandstand is relatively straightforward and thoroughfares are well signposted. There are regular trains connecting Monaco with both Nice (South) and Menton / Ventimiglia (North), as well as places in between and further afield (see map). Travel times are reasonable, with the journey taking around 20-30 minutes for both Nice and Ventimiglia.

Tickets cost under €4 each way. Unless there are too many people and platform access is restricted (which can happen at peak times over the weekend), you shouldn’t have to wait longer than 15-30 minutes for a train. Trains run later than buses (till midnight). Booking your tickets in advance to avoid the large ticket office queues that can form, especially at the end of the  day. There are ticket machines as well, but you will need coins or a credit card with a chip. Click here to learn more and book advance tickets.

Other ways to get around.

Helicopter transfers – If you’re visiting the Grand Prix for a special occasion, why not consider booking a helicopter transfer from Nice to Monte Carlo? Prices start from €120 per person each way,  the journey takes under 10 minutes.

How to Get Around in Nice